The floods of December 2013 devastated homeowners, local business and transport links alike in Lowestoft. Official figures estimate that in excess of 150 homes and 230 commercial properties were flooded, with key transport links such as the A12 and Lowestoft Train Station closed as a result of the floodwater. These devastating flood were followed by similar events in 2015 and 2016, but now the Council is set to implement a new flood defence plan. The Lowestoft Flood Risk Management Project (LFRMP) is designed to reduce the likelihood of the 1 in 15 year event that struck in 2015 to somewhere on the scale of 1 in 200 years, through the construction of reinforced and extended flood defences and the commission of a tidal gate for the inner harbour.

The board of New Anglia Local Enterprise Partnership last month gave approval to make a £10m contribution to the £32m LFRMP, with work anticipated to start on the scheme in July 2018. 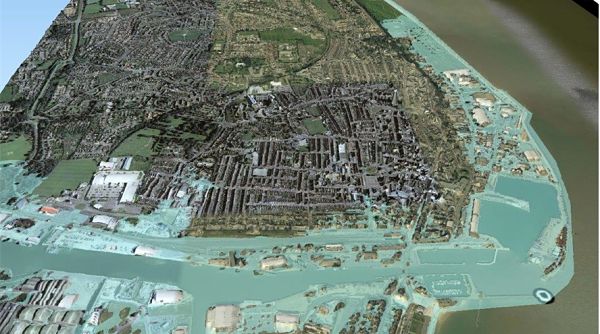 An aerial image of Lowestoft showing the area at risk of tidal flooding. Image source: NALEP