A wartime invasion of a very different nature back in Blighty

The 5th November 1916 is best known as the date that marks a switch in focus of the German Navy during World War I, from pursuit of naval supremacy to the targeting of commercial vessels in the North Sea. However, on this day back in the UK, there was an invasion of a very different nature, as large scale flooding was affecting the central south coast of England.

That night there was an extraordinary storm in the Solent and a monster wave [such as had never, tradition says, been seen for a hundred years of more] invaded Lymington…

The storm developed over the central North Atlantic during 3rd November 1916, moving relatively quickly following an easterly to north-easterly track towards to the UK. By 5th November the storm was centred over south-west England with a central low of around 960 mbar. Strong south-westerly winds were prevalent over the English Channel.

The streets of Portsmouth were flooded to a depth of several feet, and the tram routes were blocked with debris. The traffic between Portsmouth and the Isle of Wight was suspended. The seawall at Ryde was torn down, and the bathing huts were smashed into matchwood. Railway traffic was suspended owing to the flooding of a tunnel. Some cargo steamers in the Solent broke adrift, and some small craft were sunk. 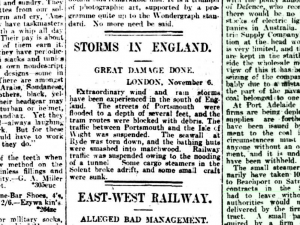