On this day four years ago, Storm Xaver generated surges of up to 2m in the North Sea, with the net result being the mass inundation of land along the UK’s East Coast. Official estimates  put inundation of residential property at 2,800 houses, with the evacuation and rescue of 18,000 individuals. This was reportedly the worst coastal flooding event in the UK since the disaster of 1953. There was intense media coverage of this event and it had prompted comparisons with the event of 31st January – 1st February 1953. Across Northwest Europe, by 7th December 2013, this storm had left 15 persons dead and dozens injured. Model estimates suggest insured losses across the event were in the range of €1.4 to €1.9 billion, including wind losses and storm surge-related flooding. According to a ‘flood footprint’ map showing seawater flood depths (with a resolution of 5 m over an area of approximately 2,500 km2 and covering a length of 1,500 km of coastline), locations listed as flooded from wave overtopping included: Boston, Great Yarmouth, Lowestoft, North Berwick, Jaywick, North Wales, Blackpool, Cleveleys, Walcott, Cromer, Whitstable, Portgordon and New Brighton (JBA, 2014).

So what has changed?

In East Riding, where a further fluvial flood event in 2007 flooded 7,000 homes and businesses, there has been £50m of investment into flooding defences. The main investment geared towards combating another surge event is the commission of the UK’s longest glass tidal defence structure. It is estimated that the glass barrier, along the coast of Paull, will protect in excess of 14,000 properties in East Riding and Hull from surge events. The glass structure has been fitted to the existing 1950s era seawall, and has raised the defence height by 1.1m, with the entire structure now standing 6.8m above sea level. 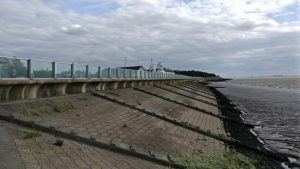