In a recent post, we outlined to you how surge-induced coastal flooding in the UK predominantly occurs (91 % of the time) between the months of September and March. Today we’re going to highlight one serious (Category 3) event from recent times that occurred outside of that window, and caused widespread flooding and disruption.

On 4th April 1985, a storm developed over Canada and made haste towards the UK. In the middle of the North Atlantic, on 6th April, the storm interacted with a large low-pressure system located nearby to the northwest of Ireland. The storm intensified and central pressures deepened to about 980 mbar. On 7th April, the storm crossed southern Ireland and then northern England and dissipated over the North Sea.

The storm was able to raise water levels around the UK coast by up to half a metre in places. At Newlyn in Cornwall, the return period was 1 in 28 years, meaning the sea level elevation was so extreme that events of that scale are only seen approximately every 30 years! The event occurred at the time of high spring tides. ‘Stormy seas’ were reported by the Met Office (1985). 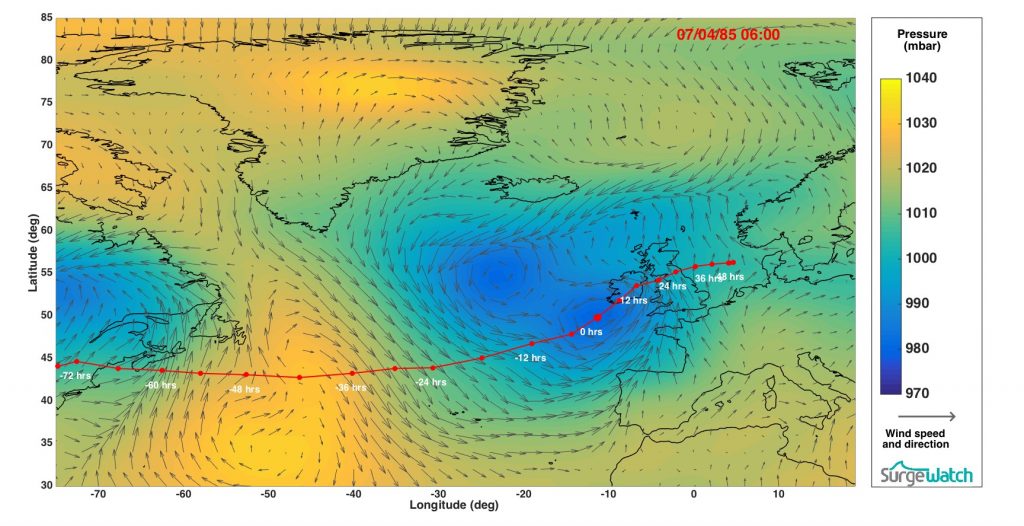 This event was associated with coastal flooding in Portsmouth, Hayling Island, Eastney and Elmer (near Bognor Regis), and Portchester (Zong and Tooley, 2003; Zong and Tooley 2003). Roads were closed in several places in Hampshire and West Sussex, including the A27 nearby Emsworth (Haigh et al., 2015), where motorists were stranded in water 3 ft. [0.9 m] deep (Ruocco et al. 2011). In Bosham, Portsmouth the conditions were described in one newspaper article as the worst in 20 years (Ruocco et al. 2011). Non-residential and residential properties were flooded in Hythe. The Times, (1985) also report the impacts of this event. Bungalows were evacuated at Elmer, near Bognor Regis due to overtopping. A quay flooded in Dartmouth (Environment Agency (2012)). Cornwall Council (2011)reported that an event during April 1985 caused by a combination of high tides and heavy rainfall impacted many locations around the county, which is considered to be in reference to this event. Affected areas included Wadebridge, Padstow, Newquay, Hayle, Mousehole, Flushing, Mevagissey, St Blazey, Fowey, Lostwithiel, Looe, Torpoint and Calstock. This included 25 properties flooded in Hayle, 11 in Fowey, 9 in Looe, 33 in Wadebridge and 35 in Padstow.

According to The Times (1985), four persons were drowned when swept out to sea as vehicles were washed away. We are unaware of any further details regarding the circumstances of these fatalities, and hence this event is classified as a Category 3 only.