The event in focus this week is the North Sea flooding that occurred during this month 48 years ago, inundating Hull, Great Yarmouth and some of the Shetland Islands.

Hull has historically suffered badly during flood events, as over 90% of the historic city lies 2 m below the maximum recorded tides in the River Hull and Humber. Therefore, the storm surge of 1.2 m on 29th September 1969 was always going to cause problems for the town. 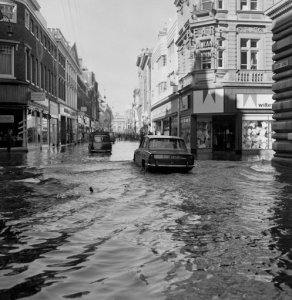 The flooded area in Whitefriargate, Kingston-upon-Hull, Yorkshire, where exceptional high tides created havoc for traffic and office workers in their way to work. The River Humber overflowed at the pier and many parked cars were surrounded by water.
Picture by: PA/PA Archive/PA Images

The storm developed offshore of the east coast of the US on 23rd September 1969 and moved northeast towards the UK.  The storm approached the UK on 28th September and the central pressure deepened to around 970 mbar. The storm travelled north of Scotland, crossing Scandinavia on 29th September producing strong northerly winds in the North Sea. Meteorological observations showed gusts of 96 knots [50 m/s], 89 knots [46 m/s], and 88 knots [45 m/s] at Dounreay, Wick and Kirkwall, respectively (Eden, 2008).

The worst impacts during this event were experienced in several English east coast towns, from Hull to Great Yarmouth (Met Office, 1969; Hickey, 1997; Zong and Tooley, 2003). In Scotland, this event was associated with localised impacts, with reports focused on Whalsay where the sea wall was “swept away” and one residential property was “completely” destroyed (Hickey, 1997). According to Eden (2008), with a storm surge of between 2 and 2.5 m this was the worst flooding along the east coast since the 1953 disaster. The Times (1969) report the impacts of this event, describing that tides swept over river banks in Hull and inundated a large part of the city to a depth of 3 ft. [0.9 m]. Two of the main bridges over the river Hull were impassable, causing much disruption to traffic. Some non-residential properties were flooded to 2 ft, [0.6 m] and the old towns’ commercial area was cut off entirely. Two electricity transformers caught fire when flood water caused short circuits. The sea level at Hull was reportedly 4 ft. 2 in. [1.2 m] above the predicted 33 ft. 6 in. [10.2 m]. Damage to the value of thousands of pounds was incurred at a fruit market. At Grimsby’s Commercial and Royal docks the tide reached 31 ft. [9.5 m] – the highest since 1953.

This event was the protagonist for the construction of the original Hull Flood Defence Barrier 8 years later.