On this day thirty-three years ago, the Solent reportedly experienced the highest tides for 40 years. The result was small scale coastal flooding in Hampshire, but also in areas around the Thames estuary.

The flooding was far less pronounced than would be expected for such large tidal heights, but why? The answer lies in the control exerted on the sea surface by air pressure. Storm surges are generated by drops in air pressure, which in turn exert less force downwards from the atmosphere onto the ocean, and allows the sea levels to rise. Scientists call this the ‘inverse barometer’ effect, and on average, a one millibar drop in pressure equates to a 1 cm rise in sea levels. Conversely, as you may expect, higher pressures exert more force on the ocean and lower the elevation of the water.

Another factor controlling surge height is wind strength. High winds effectively push water towards the coast, where it meets resistance at the land, and the winds start to pile up the water, increasing the elevation. The most serious surges occur when high tides, strong onshore winds and low pressure systems all occur together, such as the 1953 North Sea floods. Scientist’s believe that although tidal levels were so high on this day 33 years ago, the combination of high atmospheric pressure and low winds meant that the extent of flooding associated with the event was much reduced. Take a look at the graphic below from the Met Office explaining surge generation: 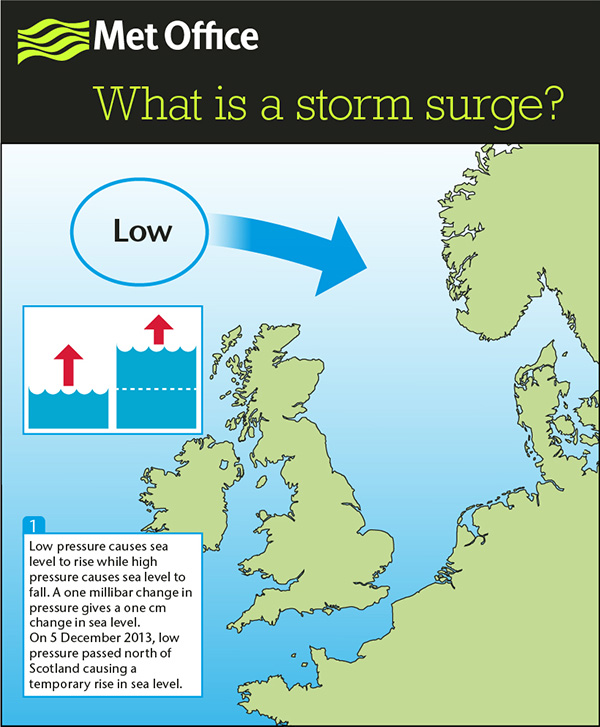