'Flooding reported in towns along the UK east, west, and south coasts'

The storm formed over the mid-North Atlantic during 8th October 1923, and moved north-eastwards before merging with another low-pressure system stationary northeast of Iceland. While centred over the Norwegian Sea, the storm reached a central pressure of approximately 965 mbar on 9th October. The winds were predominantly of westerly orientation over much of the British Isles, veering west to north-westerly in the northern North Sea.

We are unaware of any information regarding the sea level conditions during this event. Within the national tide gauge network, only the Newlyn tide gauge was operational at the time, but this was away from the region of influence. At Newlyn, the water level return period was less than 1 year. The event occurred approximately 2 days before peak spring tides.

We are unaware of any sources of information describing the wave conditions during this event.

According to The Times (1923), there was overtopping in Hythe and Folkestone, and several breaches to the sea wall in Sandgate. Aside from some general information about inundation depth below, we are unaware of any further specific information regarding the flood pathways for this event.

There was widespread flooding during this event in many locations across the south, east, and west coasts, including Hull, Scarborough, Severn Beach (near Bristol), Portsmouth, Hastings, Folkestone, Sandgate and Dover (Zong and Tooley, 2003). The Times (1923) provide much of the available information. The coastal road connecting Folkestone, Sandgate and Hythe was closed for hours. At Hythe, the roadway behind the seawall flooded to 2 ft. [0.6 m] deep, and at least 12 residential properties were inundated. The sea conditions here were the roughest for some years known, and the flood extent reached several hundred yards inland, flooding roads up to 1 ft. [0.3 m] in depth. In Sandgate, 10 families living close to sea wall had to evacuate their homes, and one residence became practically untenable. Here, the fifteenth century castle was left very badly damaged. At Folkestone, there was overtopping of the harbour pier, and the sea reached the railway sidings on the beach. There was also flooding in the town of Hastings, and in Portsmouth the flooding in Broad Street saw floodwater reach the window-sills of houses.

Three soldiers and two porters were severely injured by the wave which damaged the train in Dover (The Argus, 1923). The gales continued into the night, and all shipping traffic was suspended (The Argus, 1923; Sydney Morning Herald, 1923). 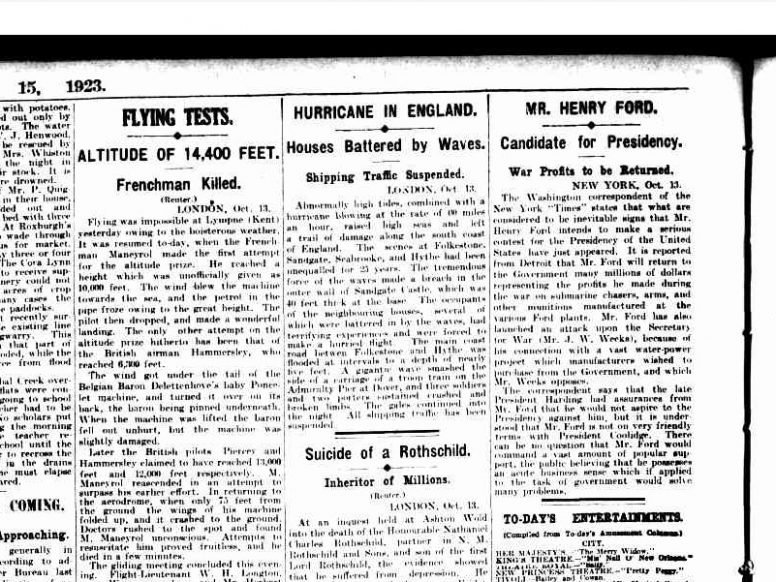