During 27th October 1927, the storm began to form over the central North Atlantic at around 40o N. It followed a northwesterly path towards the British Isles, generating southwesterly winds in its wake with a modest central air pressure of approximately 985 mbar. At Valentia, Ireland the wind speed was reportedly around 60 mph, and a [gust] of 78 mph was recorded (The Argus, 1927).

We are unaware of any information regarding the sea level conditions during this event. Within the national tide gauge network, only the Newlyn tide gauge was operational at the time, but this was away from the region of influence. At Newlyn the water level return period was less than 1 year. The event occurred at peak spring tides.

We are unaware of any sources of information describing the wave conditions during this event.

The failure of defences at Fleetwood, which were described as being left “demolished”, was the key flood pathway during this event. Defence failures were reported for other locations, including the harbour wall at Portmadoc (Lamb, 1991).

This event is notable for severe flooding in Fleetwood, Lancashire where 6 people, including three hospital patients, were drowned [one body washed 150 yards away] when a storm surge of “unparalleled height” breached the sea wall (Lamb, 1991; Fleetwood Weekly News, 2007; Wyre Council, 2013). Around 5 km2 of the Fylde peninsula was inundated by an estimated 41 million tons of water, in parts up to 12 ft. [3.7 m] deep (Met Office, 1927; Wyre Council, 2013). Around 10,000 people (45% of the population) in Fleetwood were “badly” affected and over 1,200 properties “seriously” damaged (The Times, 1927; Wyre Council, 2013). Coastal cottages at Criccieth were described as being left “tumbled” down by the water (Lamb, 1991), and one Fleetwood resident said he had counted nine caravans floating past his house (The Times, 1927). There were also serious impacts on infrastructure and public services. Lancaster Isolation Hospital was flooded when the River Lune overflowed its banks and three tuberculosis patients, who were sleeping on the ground [floor], were drowned (The Argus, 1927). According to Wyre Council (2013) road and rail links to Fleetwood were cut off, while gas and electricity supplies were “severed”. The electricity works were also flooded which “plunged the town into darkness” (The Times, 1927). With some areas flooded for a number of days, the weight of the floodwater left telephonic and telegraphic cables broken. The flood extended inland as far as Aberglaslyn and drowned many cattle (Lamb, 1991). In total, there were around 30 deaths according to The Argus (1927), with several boating incidents including 12 fisherman who were drowned in Tellegan Bay, Ireland (Nambour Chronicle and North Coast Advertise, 1927). Damage to the sea wall in Fleetwood was estimated at £11,000, equivalent to around £0.6m today (BBC 1986; Lamb, 1991). Several other locations across the northwest were reportedly affected including Blackpool, Sandylands, Criccieth, Aberglaslyn and Portmadoc. During the immediate aftermath, pumping operations were compounded by heavy rain (The Argus, 1927). The town was isolated for 2 days, and some areas remained under several feet of water even 3 days after the breach (The Times, 1927). The lack of light and unoccupied properties also led to looting taking place. A later inquest concluded that future use of the flooded hospital is not recommended (The Times, 1927). 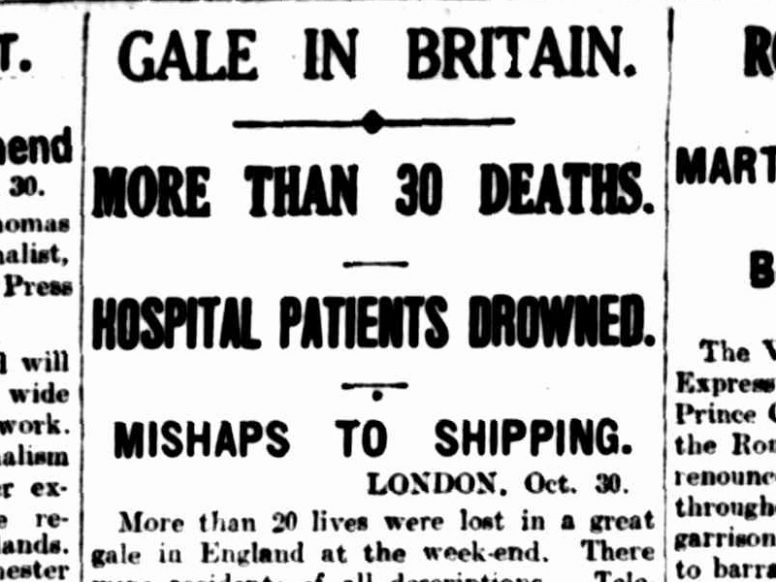 Event in Focus: October 1927 - Fatalities in a flooded hospital