It came so fiercely, that it was hard for a man or beast to escape by flight

It was reported that the flood reached a speed of 48 km hr-1 and 7.6 m high; extending 6.4 km inland in north Devon, Pembrokeshire, Glamorgan, Monmouthshire and Cardiff; and up to 22.5 km in low-lying parts of Somerset (BBC, 2007). The storm surge breaches the sea wall and Burnham on Sea and Kingston Seymour, Somerset, breaking the sea wall in the latter location (Somerset Guide, 2009; Brooks and Glasspoole, 1928). 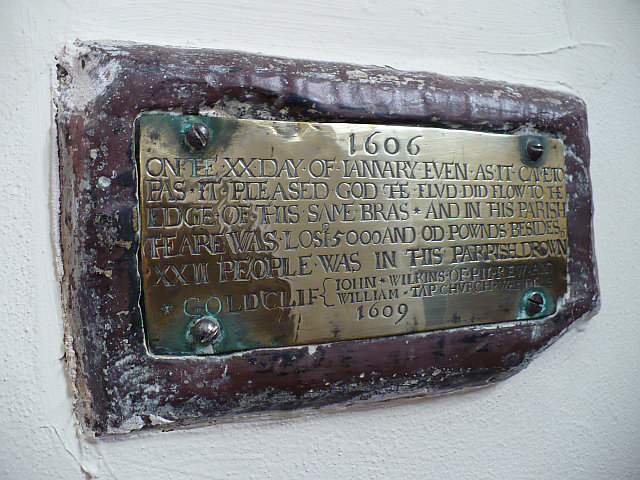 This storm surge resulted in widespread and severe coastal flooding throughout southern Wales, and Devon and Somerset in England. It is estimated that 520 km2of land was flooded (BBC, 2007).The effects were felt on the east coast of the UK, with reports of flooding as far as Norfolk (Stow, 1631; Hickey, 1997). At Burnham on Sea, the storm surge broke over the sea wall and flooded 30 villages; and the surrounding countryside was flooded with 3 to 2.7 m of water (Somerset Guide, 2009). A church in Kingstone Seymour was flooded to a depth of 5 ft, the water barely receded for 10 days (Brooks and Glasspoole, 1928). Stow (1631)  reports that £20,000 worth of damage was done to 20 towns in Somerset. Monmouth, it was reported that a milkmaid was rescued from drowning by ‘two lustie strong men’ who made a boat from a water trough (Whipple, 2011).

There are several indicators showing the maximum height of the water, including a chisel mark at Church of All Saints at Kingston Seymour, Somerset, that was filled with 1.5 m of water (7.74 m above sea level (Hawkins, 1982). There are several churches with commemorative plaques, perhaps the most famous of which is Marys Church at Goldcliff, Wales, where it is about 0.9 m above ground; and 7.14 m above Ordinance Datum (Williams, 1970). This plaque states: ‘On the XX day of Ianuary even as it came to pas it pleased God the flvd did flow to the edge of this same bras and in this parish theare was lost 5000 and od pounds besides XXII people was in this parrish drown’ (WalesOnline, 2013).

Contemporary depiction of the 1607 flood. The church is thought to be St Mary’s at Nash, near Newport. Source: https://en.wikipedia.org/wiki/Bristol_Channel_floods,_1607

“The floods extended along the coast for some twenty miles, and in some places the water reached a depth of 12 feet” –Brooks and Glasspoole, 1928