The UK coastline has been subject to terrible storms and floods throughout history. Over the coming weeks we will briefly explore a number of significant effects (that lie outside of the 100 year period, 1915 – 2015, that SurgeWatch current covers). Today we will start with the British Channel Floods of 1607, which caused the greatest loss of life from a natural catastrophe in the UK during the last 500 years.

There were ‘huge and mighty hills of water’ moving ‘faster than a greyhound can run’ (BBC, 2007). This is an eyewitness account of the devastating floods that occurred in the Bristol Channel at 0900 (local time) on 30 January 1607, resulting in 2000 deaths (Keys, 2005). The flood was evidence of God’s anger with the established church, according to puritan pamphleteers (Horsburgh and Horritt, 2007), who published a pamphlet entitled ‘God’s warning to the people of England by the great overflowing of the waters or floods’ (Figure 1).

The flood apparently reached 48 km hr-1 and 7.6 m high; extending 6.4 km inland in north Devon, Pembrokeshire, Glamorgan, Monmouthshire and Cardiff; and up to 22.5 km in low-lying parts of Somerset (BBC, 2007). It is estimated that 520 km2 of land was flooded (BBC, 2007). At Burnham on Sea, the storm surge broke over the sea wall and flooded 30 villages; and the surrounding countryside was flooded with 3 to 2.7 m of water (Somerset Guide, 2009). In Monmouth, it was reported that a milkmaid was rescued from drowning by ‘two lustie strong men’ who made a boat from a water trough (Whipple, 2011).

There are several indicators showing the maximum height of the water, including a chisel mark at Church of All Saints at Kingston Seymour, Somerset, that was filled with 1.5 m of water (7.74 m above sea level; Hawkins, 1982). There are several churches with commemorative plaques,  perhaps the most famous of which is Marys Church church at Goldcliff, Wales, where it is about 0.9 m above ground; and 7.14 m above Ordinance Datum (Williams, 1970). This plaque states: ‘On the XX day of Ianuary even as it came to pas it pleased God the flvd did flow to the edge of this same bras and in this parish theare was lost 5000 and od pounds besides XXII people was in this parrish drown’.

The flooding was so severe that there has been speculation that it was a tsunami (Bryant and Haslett, 2002). However, this was based heavily on inferences from historical erosion of wetlands; and the significant volumes of water and massive coastal damage that can be caused by storm surges were underestimated (Horsburgh and Horritt, 2007). In addition, areas of the eastern side of the UK also flooded on the same day, although in the evening (Horsburgh and Horritt, 2007), consistent with storm surge behaviour but not tsunamis.

According to eyewitness accounts of the weather, the storm surge appears to have been due to gale force westerly or south-westerly winds (Horsburgh and Horritt, 2007). Horsburgh and Horritt (2007) used numerical modelling to confirm that the exceptionally high tide, combined with a storm surge from this eyewitness weather, is capable of producing the flooding that occurred.

Woodcut image of the flooding caused by the 1607 storm surge in the Bristol Channel. Printed in London by W. I. for Edward White. The image depicts houses and villages being swept away; and loss of farmland, livestock, homes, and lives. 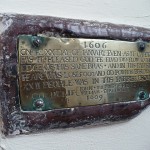 Plaque commemorating the 1607 flood at Goldcliff Parish Church (WalesOnline, 2013). Note the year is recorded as 1606 because under the Julian Calendar, the new year did not start until 25 March.