The windstorm of 7-8 December 1703, is often referred to as the ‘worst storm to have ever hit Great Britain’. For example, catastrophe experts Risk Management Solutions (RMS), amongst others, consider the 1703 storm to be ‘the most damaging storm to have affected the southern part of Britain for at least 500 years’. It is a benchmark to which more recent windstorms have been compared to by the media (e.g. the 115 mph winds of 15-16 October 1987; the 100 mph winds of the ‘St Jude Storm’ of 27 October 2013). With storms of such ferocity, there is always potential for intense wave action and storm surges. However, the worst cases of coastal flooding and erosion in the UK are generally associated with large tides as well as storms, hence it takes something special to cause coastal flooding during periods of smaller (i.e. neap) tides. In the case of 1703, a lack of data to compare to events of today, and the huge damages that would have been caused by wind and rain, make it harder to separate the effects specifically associated with storm surge across the entire region affected. However, as discussed here, the coastal impacts of the 1703 event appear to have been significant. This is despite that the peak of the low pressure system passed across the middle of England (between Bristol and London), and that this occurred during a period of smaller astronomical tides.

The windstorm event hit the British Isles on December 7-8, 1703 (November 26 -27 on the Gregorian calendar used in England at that time) and impacts are chronicled in a book by Daniel Defoe (the author of Robinson Crusoe). The storm is associated with causing terrible damage in London, and 123 people were killed on land in England and Wales, due to the collapse of roofs and chimneys and an estimated 8,000 killed in more than 100 shipwrecks at sea. Several authors refer to meteorological data extracted from naval log books (e.g. Lamb, 1991; Brayne, 2003; Wheeler, 2003); and RMS (2003) summarise the available meteorological information, noting a comparison with two damaging modern day storms, Lothar and Martin (December 1999), for which it is estimated that 1703 was more powerful than these combined! The 1703 storm was a large deep and fast moving ‘daughter’ depression, with a central pressure falling to around 950 mb, embedded along the southern flank of an enormous and deep depression centred to the northeast of Scotland, flanked by a band of high pressure over France. The track of the storm centre passed over the English Midlands and across the North Sea into northern Denmark. The highest winds hit southwest Wales at 03:00, London at 06:00 and Copenhagen around 11:00 (the morning of 8 December).

The storm track and reported drownings in the Severn Estuary (80 people died, and tens of thousands of livestock were swept away) suggest that the windstorm drove a major surge into the Bristol Channel and up the Severn Estuary. This flooded villages along the Somerset coast and the city centre of Bristol. Meanwhile, the strong winds in the English Channel would have generated large waves (and probably a significant storm surge); there were notable ship wreckings across the south coast (e.g. Goodwin Sands). Most notable in terms of south coast flooding and erosion is the washing away of the lowermost street of houses at the village of Brighthelmstone (today’s Brighton) described by Defoe as ‘the very picture of desolation, that it looked as if an enemy had sacked it’.

The height of the sea levels as a result of the 1703 storm is unknown. However, using tidal harmonics and knowledge of observed (more recent ) surges, a speculative insight can be gained. The predicted tidal high water at Avonmouth (Bristol Port) for the event is 10.2m at 03:50 8 December 1703. This predicted high water is close to the time of the highest winds, which would explain the flooding in the Severn Estuary, an area with one of the largest tidal ranges in the world (hence the surge and tide peaks have only a small window of opportunity to combine to devastating effect). However, comparably, the predicted tide during the 1607 storm surge disaster which killed up to 2000 people almost a century earlier (e.g. RMS, 2007) was much larger at 14.3 m. This was thought to be coincident with an estimated 2 m surge (Horsburgh and Horritt, 2006). The 1703 surge has not been assessed, and only the predicted tide is known. However, the drowning of so many people and animals on a neap tide suggests that the 1703 surge must have been large to have raised the sea level so significantly above what was a relatively small tide, although the night-time occurrence of the flood, freshwater flow, and that there were dwellings on low-lying marshland, could also be significant factors in the death toll. It is well known from recorded data during the 20th century that large surges can occur at Avonmouth, associated with secondary depressions which pass north-eastwards over Ireland at a critical speed approaching approximately 74 km/hour; and which are amplified as they propagate into the narrowing and shallowing estuary. The largest observed surge is 3.54m in March 1947 (Lennon, 1963; Heaps, 1983). Perhaps a surge in this order of magnitude coincided with the peak of the tide that day to cause the terrible flooding in this region? The other coastal region reported to have been affected was the east-central English Channel, where the violent seas caused the reported damage to the lower streets of Brighton. However, if the storm had coincided with a spring tide (and therefore with high water levels of at least half a metre larger), it is plausible that greater coastal flooding would have been reported across the region. In terms of morphological impacts elsewhere on the south coast, West (2010) also notes that the storm changed the mouth of the Beaulieu Estuary (in the relatively sheltered waters of the Solent) by forming a new spit.

The population of England and Wales in 1700 was approximately a tenth of what it is today. Homes and flood defences are now built more robustly, but there would still be potential for huge damages, disruption and risk to life on land and near the coast should a wind storm of 1703’s intensity occur again today, and it may be an event even more characterised by coastal erosion and flooding if combined with a period of larger astronomical tides. 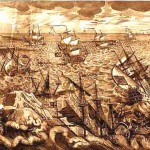 Artist’s impression of The Great Storm of 1703

Lennon, G. 1963. The identification of weather conditions associated with the generation of major storm surges along the west coast of the British Isles. Quarterly Journal of the Royal Meteorological Society, 89, 381-394.