The important message from the study is that the effects of a changing climate do not have a uniform impact across Europe, with some regions experiencing earlier flooding whereas such events are delayed elsewhere. Ultimately, climate change effects all manner of environmental parameters such as storminess, snow melt, and soil moisture content, all of which impact upon flood events.

In the North Sea region, the effect of climate change is to delay the onset of winter storms, which has resulted in a shift in flooding events on the order of 14 days later per decade (Figure 1). 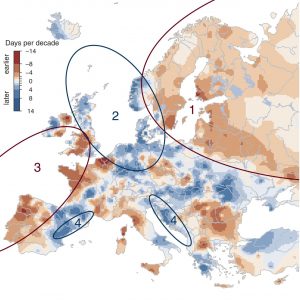 For a summary of predicted UK impacts on coastal flooding as a result of climate change, take a look at our recent post here.